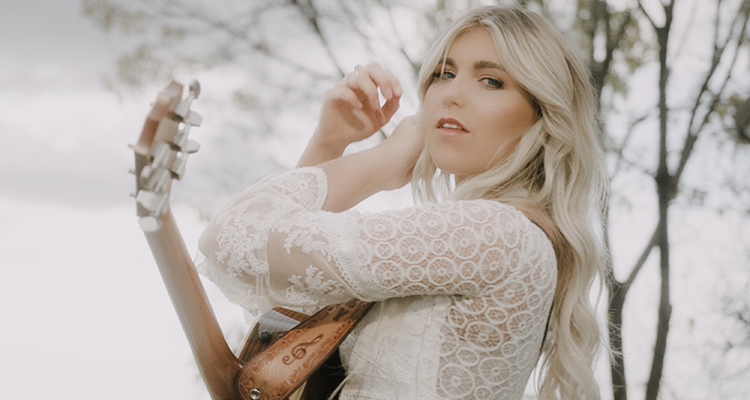 Nashville, TN (August 7, 2020)
Rising Country/Christian Country artist Brennley Brown became a Huntington Beach hero over night after what started with just her and an acoustic guitar serenading a few of her neighbors from atop the balcony of her family’s home. As the weeks passed by during month’s of quarantining, neighbors would look forward to her concert series every Friday night. She didn’t intend for it to become an actual concert series, but throughout the week she received flowers and letters from her community in her mailbox with song requests and gratitude.

Friends and soon to be friends would gather on their lawns waiting hours before her performance to ensure they had a great seat. On May 29th, 2020 Luke Wooten (Grammy Award winning producer) flew to Huntington Beach to record Brennley Brown’s live performance with the goal of encapsulating some of the magic and hope that these sessions had instilled.

A parade of fire trucks came down Alabama Street during the middle of Brown’s set and were greeted by the cheering people of Huntington Beach who were proclaiming their support for front line workers. Luke Wooten described the sessions by saying “In 2020 there is no single word that describes this year better than “uncertainty.” Born out of necessity and a deep love of music, Brennley Brown’s balcony sessions became a source of comfort, healing, and as much of a return to normalcy as the times would permit.

Brennley’s gift for delivering heart, soul, and emotion through her vocal performances ended up being just what the doctor ordered.” Brown’s vocals were both timeless and healing as she sang her heart out with acoustic guitar in hand(like it all began) accompanied by her dear Nashville friend Gideon Kleinon the violin; Klein flew from Nashville to support the Country star. The pandemic has taken away so many joys of life over the few months, but Brown refused to let music be one of them. Brown shared with the crowd “through this I have realized that there needs to be more good in the world and through music we can bring hope and encourage others…so that is what I hope to do through my music. I am extremely grateful to God for the gift of music and how powerful it is. This has allowed us to do something normal in a time that is very not normal.”

Brown has been leading worship on Sundays the past few months at Greg Laurie’s Harvest Church through their online ministry which reaches thousands of people per week worldwide. Laurie (a well known author and evangelical pastor) and his wife drove to Huntington Beach to support Brown during her Balcony Sessions.

Brown has been blessed with a busy few months as she just celebrated on July 24th the debut of Dreamwork’s Dragons: Rescue Riders: Secrets of the Songwing on Netflix. Dragons: Rescue Riders is a spinoff of the well known How to Train Your Dragon franchise. Brown costars alongside Hamilton’s Renee Elise Goldsberry who both showcase their stunning vocal talents throughout the episode.

She will be releasing her long awaited self-titled EP later this fall, which is also produced by Luke Wooten. Her recent single “One More Hallelujah” is currently on multiple major editorial playlists on streaming platforms. Nothing can stop 18 year old Brown as she fully embodies heart, faith, and talent in all that she does.

Track Listing:
1. What a Wonderful World (by: Bob Thiele)
2. Boulder to Birmingham (by: Emmylou Harris)
3. Photograph (by: Ed Sheeran)
4. River (by: Joni Mitchell)
5. Fields of Gold (by: Sting)
6. I Surrender (by: Crocker Matthew Philip)
7. The Gift of Music (by: Brennley Brown)
8. God Bless America (by: Irving Berlin)